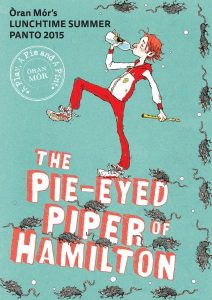 Produced in association with Ayr Gaiety, this year’s Summer Panto will run at Oran Mor from 6th – 25th July (Mondays – Saturdays) and then go on to a weeks run at the Gaiety from 28th July – 1st August. After that, The Pie-Eyed Piper of Hamilton will be on at the Edinburgh Fringe: Assembly George Square Studio from 5th – 31st August

The Pie-Eyed Piper of Hamilton by Dave Anderson

The Mayor is very worried: the City has become a victim of its own success. With great wealth has come great excess. And with great excess has come danger. Danger from vermin. OK – let’s be honest.

He’s also concerned about finding a suitable husband for his “Beautiful” Daughter…It’s a pantomime!

His first problem seems to have a solution. There’s a peasant from a little hamlet called Hamilton who’s famed for working miracles in pest control, but he comes with issues…

The “Play, a Pie & a Pint” team are back with a Summer Panto (no, really!) with all the traditional ingredients, some plot twists, and added RATS.